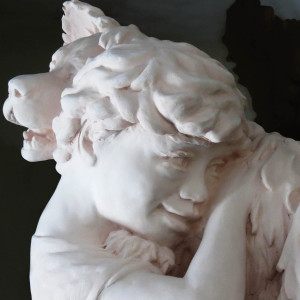 I really appreciate Saint Francis of Assisi and his kinship with our wild wanderers.  For Francis, God’s love of nature was reflected in all of creation.

My favourite story attributed to him is how he tamed the Wild Wolf of Gubbio.  A terror of an animal described in larger than life stories, and may have inspired the Grimms’ Red Riding Hood tale.

This creature killed and ate any unfortunate creature that wandered alone along its path. Be it boar, lamb, or man. A terror that left the towns folk quivering at night.  Wanting to help, Francis, with disregard to warnings, set off into the mountains in search of the wolf. He had faith in all that was needed was a little mutual understanding.  At first sight, the animal charged, just as Saint Francis held out is arm.  In that moment, perhaps startled by Assisi’ calm demeanour, the wolf changed his gate from that of attack to rambunctious play… The two become the best of friends, brothers for life.

Now, that’s a story… and this was the motivation behind this statue, to capture this very moment.  the connection between an unlikely pair.   Here I have sculpted Saint Francis and the Wolf of Gubbio as new brothers caught in the momentum of a wrestlers tackle…. In the process, these two are once again young, as youth can be innocent to life’s cares and struggles. 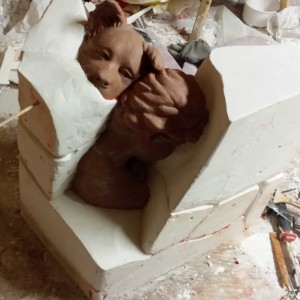 If your interested in learning more of Brothers… follow my “Step by Step” tutorial.  The complete story on why I chose this theme and the long process from beginning to end…  Motivation, to maquette, through to plaster and clay casting…. Finishing to kiln firing