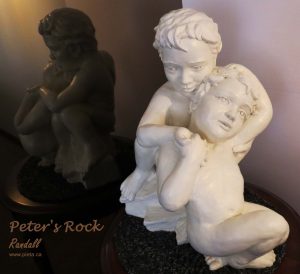 Imagine for a moment that we were miraculously transformed back to innocence. Once again to see the world as a wondrous playground.  Where what we imagined could be real.  Faith comes easier for children.   And so it was for Saint Peter who so wanted to have faith as firm as rock.  He hoped to brave the stormy sea, tried to defend the lord with sword in hand, believed he would never betray Jesus.

When the apostle’s faith was challenged, Jesus would teach; “unless you change and become like little children, you will never enter the kingdom of heaven… If anyone wishes to be first, he shall be the last of all and the servant of all… You are Peter, and on this rock I will build my Church.”  With this in mind, I like to see Peter in his full strength, as a child.

Both Saint Peter and Jesus are represented as innocent toddlers.  Peter sitting upon the rock, supporting and being supported by Jesus.  Both physically and emotionally.  Peter tethers Jesus to the rock, uniquely responsible for the unity of the Church body with Jesus and his teachings.  More significantly for Peter, though he sits grounded on the rock, he is emotional tied to Jesus.  Clasping hands, Peter’s faith is strengthened as it was during stormy weather.  And so, just as Jesus buoyed Peter from sinking into the sea, so now is his faith lifted to lead the Church, trusting in the Word eternal. In this way, Jesus is Peter’s Rock. 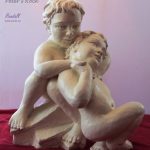 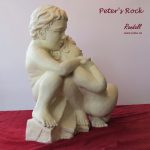 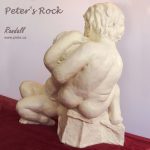 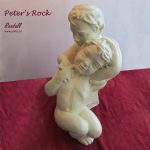 This is a life sized fired clay statue of a future marble finished work.  If you curious on all the work that went into Peter’s Rock; from maquette to plaster to finished statue, just click. 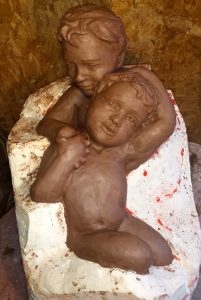