Michelangelo loved to sketch; as is evident by the copious amounts of drawings he left behind.  Modelling on the other hand, whether in wax or clay, was more of a necessity than a passion.  Though many of his surviving terracotta maquettes show a skill and flair that rivals his marble, the master believed that the process of ‘adding’ clay material, required less skill than the purity of ‘taking away’ stone.  The hatched line sketching technique he had perfected was similar to carving in its unforgiving quick and permanent strokes.       Ink, like stone shared a confident certainty that Michelangelo admired.

Still, he was a great creator of clay models, statuettes that survive as examples for us today.  Not just as functional maquettes, tools to aid in blocking marble, but as works of art, as permanent as stone.  And this is why I love to draw in clay.  There is a beauty in its fluid nature.  Just imagine if the Master had chosen to sketch in clay rather than charcoal or quill…  how many more masterpieces would we have to share?  Of the two methods of dimensional sketching, the drawing provides the greatest economy of persevering ideas.  An artist can sketch out dozens of designs in less time than it would take to complete a single maquette.  Michelangelo would continue to return to both his sketches and models time and time again as he advanced from one project to the next.  The Sistine Chapel, and the Medici Tomb build upon his earlier studies.   Inspiration captured in ink or terracotta is realized through fresco or marble.

And so it is with my work, though much more humbling and much less masterly.   My  Adam & Eve, The Pear has been cast in plaster and is now ready to be poured in clay. The proof is in the pudding… my jigsaw jenga puzzle is now dry and ready to be assembled. 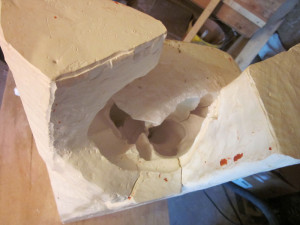 As there are so many sections, and these must all pull away from each other in oddly opposing angles, it is impossible to build keys within the forms.. (normally key structures  – male and female – prevent slipping or sliding) due to the irregular design, I will have to assemble each piece while ensuring the internal edges are aligned…

There is little structural integrity or stability until the mould is completely assembled, siliconed and then duct taped….  Once this is done, I can tip the unit on its side and give it a push into the tipping box. 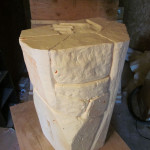 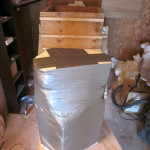 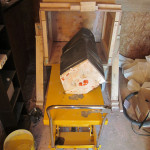 Once inside, and secured from wobbling, the whole box can be teetered 90 degrees and locked upright.  Plasticine is used to form a dam and aids in preventing spills and waste when it’s time to pour the slip out.  ( it would surprise you how much liquid is sucked into the plaster, the slip that is poured in will be absorbed dropping the level down several inches, the Dam allows for extra slip to rest above the mould, ensuring clay doesn’t dip below the top –  clear as mud?) 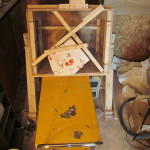 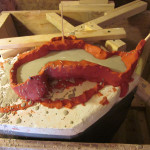 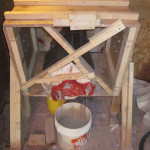 Once the clay has begun to set to the consistency of a chocolate brownie the inner sections can be removed and the assembly is ready to be righted.  This time will vary depending on the size and thickness of clay, but expect between 6 and 12 hours. 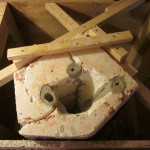 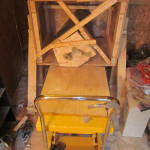 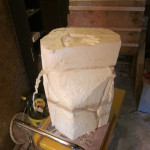 Open one section at a time, clean and repair as you go.  Take your time.  If you try to remove the plaster too quickly, the clay will be too damp.  The whole project could collapse and fold into itself, or simply tear away.  If you need more time, extra days, spray with a little water and wrap with cellophane. 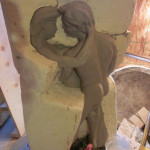 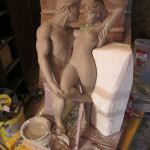 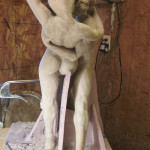 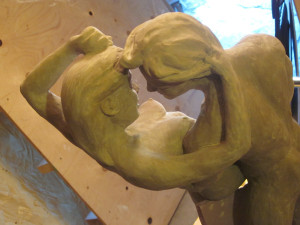 By thoughtfully removing each section, you can move around the statue, relying on the remaining plaster to hold up the weight.  As needed, add extra support with cut out high density foam.  As you go, use a paint brush to wet polish the clay.. this is the most gentle form of smoothing. 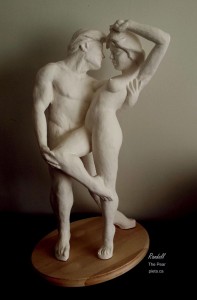 If at all possible Do Not pick up and handle greenware; it is Very VERY fragile.  So, hold off with attempting to finish sanding or adding refining details.  I have chosen to send this project to the kiln, and bisque fire.  This gives it enough strength to withstand the file and drill. Trust me on this one… a three legged statue is supper breakable… Cooking will add weeks to the timeline, what with ensuring the statue is bone dry, but better to wait then suffer the consequences of impatience.

Now that The Pear is low fired, it is strong enough to finish, but that will have to be saved for another day… It’s the end of April and temperatures have warmed up outside.  It’s time to get my marble on…  open up the summer studio and get back to stone.