It’s tempting to just release your artistic forces and throw caution to the wind; certainly it’s quicker… but then there is good reason to regularly revisit your original maquette design.

Michelangelo certainly invested much time into his smaller scale models, and from these he could ensure the grace and majesty he imagined would continue to transfer to his marble… 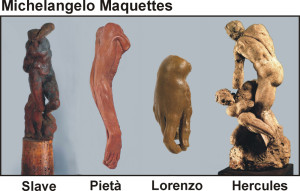 The model is key to ensuring your chisel stays on course.  Angles and expressions, curves and subtleties are often realized in the clay maquette, but lost in translation to stone.   You have devoted so much thought to your message….  The strength of sorrow,  the passion found in purpose, the embrace of life and death,  all represented within the pyramidal yin-yang.   This ideal is now trapped in the stone and is relying on you to release it from its bonds. 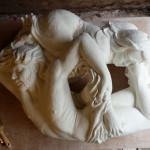 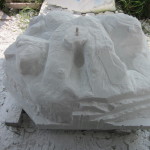 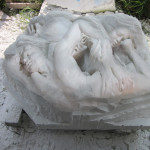 Michelangelo believed the artist ultimate purpose was to reveal the ideal human form that was trapped within the marble…  the stone did not inspire the vision, but was chosen because it conformed to his vision.  This is a significant difference from the renaissance style of sculpting to both modern and traditional art techniques. 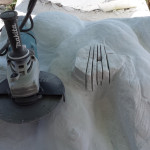 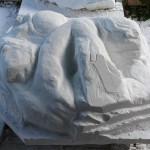 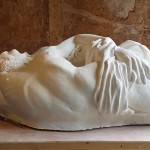 And so we continue to look back to the maquette.  With my Pieta Spero, I want to ensure the pyramid angle remains true.  And this is best done with angles and levels.  Today we use the Spirit Level invented in the late renaissance period,  Michelangelo would have been more familiar with the Roman water level, which when combined with plumb lines, geometric angles and the pointing chisel would perform the same duty.   With the level and angle, I can quickly see that my stone rest comfortably below my angle and so I can carve down until the bubble is balanced. 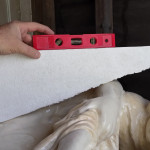 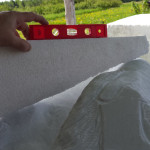 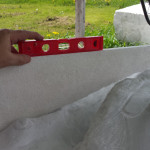 Always remember that the stone does speak to you… guiding you along your way…  You may remember from a previous post that you need to keep a close eye on flaws as they are revealed; especially when using pneumatic tools. 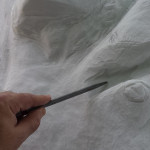 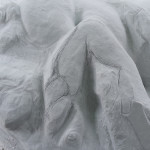 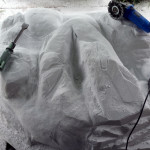 The angle and general positioning of the arm in relation to the chest are now in line… From this practical work, I really have an understanding of why Michelangelo would first focus his attention on the torso… it’s from this central point that all extremities radiate out…  The positioning of the torso determines all other angular relationships…  More on this later in my next post. 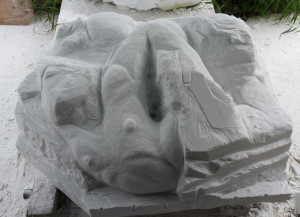