Selecting the best quality marble is an important step that I covered early on, but as I pointed out in that post, finding perfection is impossible.  And despite my best efforts to work within the stones limitations, imperfections can appear from deep within. 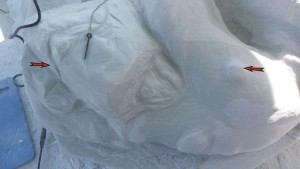 The dark line that I first uncovered while lowering the shoulder, has revealed itself to be deep, long, and in a particularly visible location. Crossing his face and along the chest.

This could be very serious… if this is actually a fracture and not simply a colouration, It could result in my marble splitting in two. What a disaster. So, before I continue hammering I’ll need to test the sensitivity of this flaw.

Michelangelo would also need to assess the stone as he worked. And would have dealt with surprises revealed along the way. 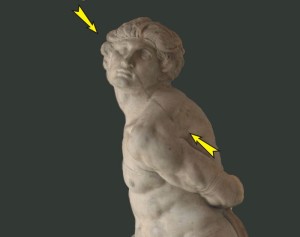 Despite his best efforts to select stone that was as close to perfect as possible, spending weeks examining marble veins high up in the Carrara mountains, his stone still contained weaknesses that needed to be finessed. The clearest example of this can be found in the Rebellious Slave where a dark line angles down and across the face and back.

Consider also the block used to create David. As I mentioned earlier, this was not only fractured, and weather worn, it was also manhandled, carved and drilled decades before Michelangelo performed his magic. 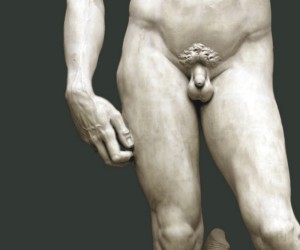 I often wonder if David’s disproportionately large hand was a result of Michelangelo’s attempt to work around imperfections in the marble.  Clear when you examine the added length of the back hand, fingers and thumb in relation to the circumference of the wrist.  We may never know..  But certainly, The stone with its imperfections dictated the overall proportions.  All artist have to work within the limitations that present themselves…

And so it is with my Pieta Spero. 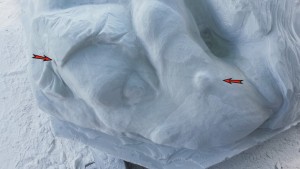 Using an angle grinder to minimize shock, small cross sections of the flaw are removed from the head; a critical area that will soon need to be carved. These are then set aside for testing.

From these sections, the flaw can be stress tested.  First I test for changes in hardness by filing across the grain and with the grain. Looking for any differences in hardness and granular texture.  Second, I chisel the line to confirm fault or colouration.  A fault line is caused by stress and would normally separate into sections.  Colouration normally does not crack.  Third, with one side firmly grasped in a vice, I hammer the opposite side of the stone with one strong hit.  Look to see where the stone cracks. 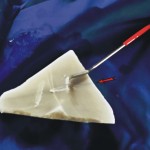 Filing across and with the grain 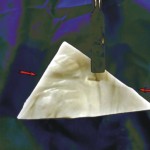 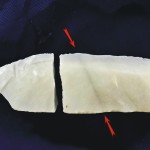 My three test have proved that this is a fine colouration only… no fault. And that’s good news.

I can continue to round my statue without too much concern of splitting the piece. 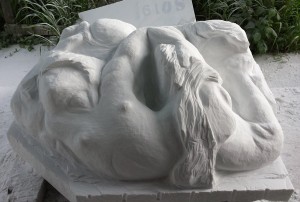