Marble counter tops look better when the stone has a ‘marbled’ colour… that is, swirls of varying tones and shades…. This will enhance the appearance in your kitchen… 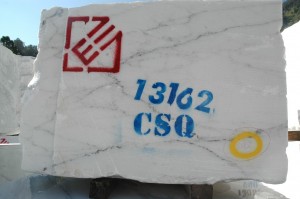 Veins in the marble can distract the eye

A stone without faults is best, but if they are present (and most affordable stone will have at least one) mapping out the fault line, and then working around them is critical if you don’t want your hard work shearing off in unexpected directions. This has happened to us all and nothing feels worse…. I would rather pummel my thumb then crack my statue along a fault…. 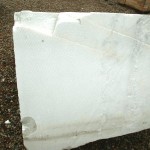 Examine your marble from all sides 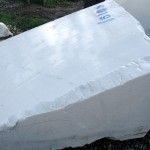 Marble Should not be left directly on the ground 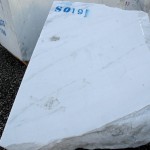 Salts can be absorbed from the road

Michelangelo would fury at the injustice if he had discovered a hidden vein wile carving… His first attempt at the Risen Christ was abandoned over imperfections, and famously he sledged limbs off his later work, the Florentine Pieta.

So while you are playing in the marble pit… find the best you can afford, and then plan to work around the stone you end up blessed with.  Adversity will test your abilities.

Our Renaissance Master, whenever possible, hand selected his marble. The exception to this was his most remembered piece, The Monumental David.

The original Stone Block was left neglected and exposed to the elements for over 25 years and had shown signs of weather related deterioration.

We know that the original 19 foot behemoth was quarried near Carrara, over 40 years earlier, however, all stone is not created equal, and this marble was of poor quality, being porous and more susceptible to elements.

It is an interesting historical note that almost half a century prior to Michelangelo working on this masterpiece, two previous sculptors, Agostino di Duccio, and later Antonio Rossellino had both attempted and failed to carve this stone…. The complexity of working a 6000lb block would prove too much of a challenge for most of us.

What they did succeed in doing over their 15 year attempt, is damaging the marble. They had started carving the legs and torso, and had likely drilled holes between the thighs before abandoning the stone entirely.

Then for an additional generation, the partially carved block was left lying flat on the ground exposed to the elements…

It is a testament to Michelangelo’s genius that he was able to create his most revered work with such an ignoble and rejected stone.

A lesson for us all, today as we look through the blocks to start our carving adventure.

Marble should not be left for long lying on the ground… it is porous and will absorb water. Technically, this is called “Rising Damp” If the stone freezes, micro cracks can be formed. The chemical composition of the stone can be changed if salt is used near the quarry… Water, Weather, Salts, Air Pollution, all can cause Spalling, Sugaring, Flaking, Cracking and in general, Future Misery…

So spend the time looking for the best….. The finest stone will look like a bar of soap. 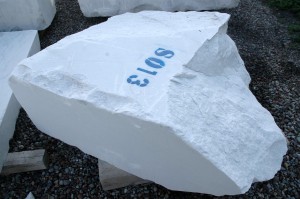 This Stone is almost perfect

Of course, a bar of soap the size of Lexus will cost as much….

A high quality block half the size Michelangelo’s David can easily set you back the same amount as a sporty BMW… or a luxury vacation to the Mountains of Northern Italy…. So unless you work for the Medici Family, or are fortunate enough to have Bill Gates as your patron, you will have to settle for what you can afford.

And then work within the limitations of the stone.

One thought on “Look for quality”