I have a special place in my heart for Michelangelo’s unfinished works… most abundantly found in the collection of statues partially carved for Pope Julius II Tomb. The series of six Slaves, to varying degrees, show step by step the masters creative thought, his planning and execution.

From the Awakening Slave still trapped within it’s megalith, through to the perfection of the completed Dying Slave, we see the unison of a singular method. Michelangelo’s gift from God, his representation of perfection within the human form. Classical Realism.

Of these, Atlas is the finest example of Michelangelo’s method.  His effective use of available stone.  Blocking techniques used to anchor his modelled concept within the mass.  As seen in the partial carving of the face and initial rough cutting of the elbow.  This then is followed by the rounding of the stone; again evident in the comparative elbow and mid arm.  This was done with the point, toothed then rounded chisel, with the rasp smoothing out the surface. 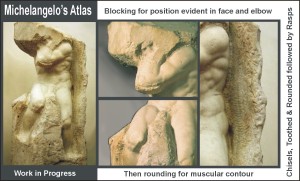 Its no wonder how many of his contemporaries and today’s art historians fall under the spell of Michelangelo’s ‘il terrible’ and consider his work as ‘non finito’. The master’s overpowering skill and creative flow lend even unfinished work the air of completion. END_OF_DOCUMENT_TOKEN_TO_BE_REPLACED

So how did Michelangelo do it? Swinging his hammer against chisel transforming a large singular block into the living Pieta. Revealing the life of Jesus and Mary through the incremental liberation of tens of thousands of marble flakes. Did he just go at it? Releasing the animal, his inner id? Or was there more method and planning?

No one really knows for sure. Michelangelo was fanatical at working in private, chastising anyone who may interrupt his rhythm. There are few who have witness him in action.

Giorgio Vasari who claimed to have first hand knowledge, a singular witness, has described how Michelangelo would immerse his wax models in water and gradually raise them up wile carving stone as the figure was revealed above the water line. Though this was a common technique of the time, it was unlikely that the master used this method. If you look at his unfinished statues, the torsos are carved first with less attention to the extremities… If an immersion water tank was used, then in the case of the slave, the hand should be carved with either the upper or lower arm (depending on attitude)… as they emerge from the waterline simultaneously.

No, Michelangelo is doing something different, he is attacking the body first; the torso the limbs, and then moving on to the extremities; the hands feet and head.

As a classically trained master, he would have been very familiar with Hellenistic Greek sculpture which employing the Grid or Point system. Points would be measured on the original Maquette and then increased in size to the correct proportions to be carved onto the marble. A common method but less than precise. When we look at the perfection that is Michelangelo’s work, clearly he did not rely on a simple Point System.

So what method did this secretive master employ?

Did Michelangelo stumble on a new invention? Did he jealously keep this radical new method close to heart; not wishing his fellow sculptors from mastering the new tool? Competition was fierce for scarce lucrative commissions.

Just before Michelangelo’s time, Leon Battista Alberti, a Florentine architect invented a new tool to copy statues; the Finitroium. What is in today’s standards a very simple geometric tool, was during the early Renaissance a great leap forward in combining geometry with art. Just as a navigator could fix the location of the ship at sea using angles and bearings, so could an artist fix the location of a model within a block of marble using fixed angles bearing and distances. Simple and very precise. Alberti’s invention, was just at the right time and place for the young Michelangelo. 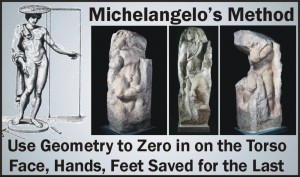 In reality, there would be a combination of methods, starting with the generalized Greek Grid System to get the general layout of the stone. Followed by the more precise geometric Finitroium to ensure the statue rang true to the visionary maquette. Finally, to finish off the detail, the master would switch to callipers and his personal artistic flair found in his own hands.

But it’s the Finitroium that I will be using as I continue to block my Pieta. I want to ensure that I stay steady and true to my original design, despite that my marble sits off centre, askew and with irregular sides. This is where a simple nautical tool will ensure my chisel glides the contours of my Maquette in spite of my eyes losing perspective. 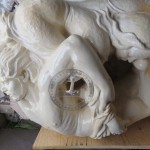 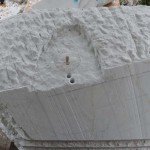 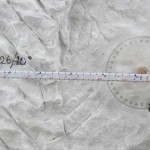 Securing the protractor to the centre of both the Maquette and Marble, I can now easily convert bearing distances and depths.   The final statue will be life-size and so I will need to increase the model by 1.3 percent, as reflected between the red and blue units of measurement.  I leave a two unit buffer as a margin of error and so I only remove 8 units but note that there is 10 units of actual depth. 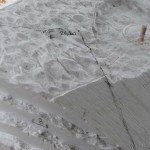 Mark Out Cut line with Depth 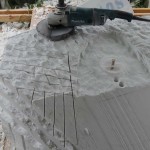 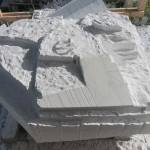 The beauty of the geometric system is that it can be worked on the fly, quickly taking measurement, confirming depths.  In no time, you have safely removed a significant amount of stone without the worry of removing too much. 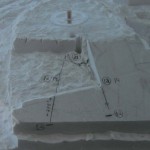 Looks Can be Deceiving 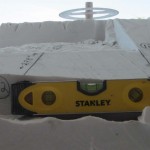 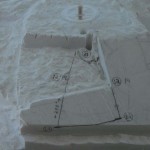 Also, math don’t lie.  When you’re up close and personal laying on your stone holding over your head a grinding wheel, often you can start to loose focus.  (OK, exaggeration for dramatic effect) As you can see from the photos above, with geometry, a depth of 12 units looks different from left to right. But sure enough once the bubble is placed on it, the line is true, its my perspective that is off. 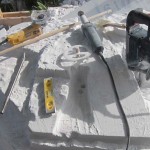 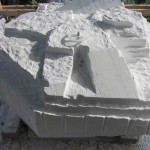 The difficulty with “artistic realism” is it’s a real challenge to keep it real.
It’s much easier to just go with the flow, release your inner id and carve beautiful flowing shapes. Nothing wrong with that. But if you’re in search for realism in the renaissance tradition, then geometry will ensure your tools run true.

When studying your stone, and planning how to best fit your maquette into the marble, you need to remember that you are drawing in Three Dimensions. This is easier said than done when you consider that you are dealing with an irregular shaped block that most likely has flaws. 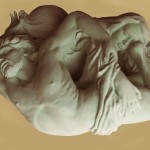 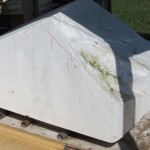 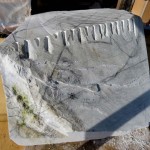 END_OF_DOCUMENT_TOKEN_TO_BE_REPLACED

The human body is a wonder to observe.  Every fold, bend, curve of muscle reminds us of the miracle of life.  Even more interesting and miraculous is the complex nature of human emotion and thought.  The slightly raised eyebrow or tilt of the head, subtle changes in gestures are designed to emote feelings.

Michelangelo’s genius was not just found in his unparalleled skills in marble carving, but much more significantly, in his mastery of sculpting the true human fluid form out of unforgiving cold stone. END_OF_DOCUMENT_TOKEN_TO_BE_REPLACED

Choosing your marble is reminiscent of school yard play…. Finding that precious stone… playing Indiana Jones… But now that you have dusted yourself off and have the block placed in your studio. Its time to get busy.

Designing your masterpiece through pencil and clay sketches is where the true work begins. The ability to discipline yourself to the task of creating a Maquette separates the Master from the Novice. Long before you can apply your muscles to the hammer and chisel, you will need to lovingly caress and model clay.

I know that for many, there will be the temptation to jump right in and start swinging at stone… and for the contemporary artist this may be the best way to coax shapes and curves from the natural grain that the stone presents.

However, if you are interested in realism… in the Renaissance tradition, mastering the maquette is necessary, and if done well, can be financially rewarding.

Michelangelo always made models. In fact, for each scale maquette of a future marble statue, he would additionally create two smaller sketch models (bozzetto). The first as a charcoal sketch, the second in wax or terrasecca (unfired clay)

So important was the modelling process to Michelangelo that he often and publicly lamented on how artist of his generation failed to develop the ability to sketch their work in advance. END_OF_DOCUMENT_TOKEN_TO_BE_REPLACED